Freedom of Speech and the Right to Offend 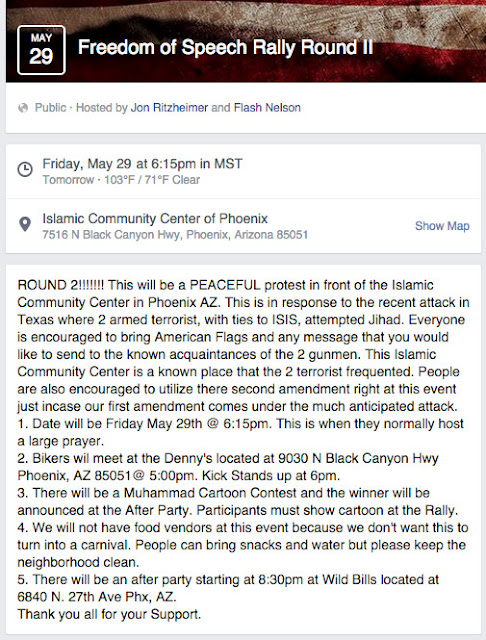 It appears that part II of Cowboys and Muslims will be taking place at a mosque in Arizona during their largest prayer session of the week. I have absolutely no respect for the people who are doing another “Draw Muhammad” contest that should be starting in about seven hours from now. Sorry folks, I can’t show disrespect for the person who dips a crucifix in urine and calls it art, just like I can’t respect anyone who want to make Muslims feel miserable by doing this. Wrong is wrong, and I am breaking from the ranks of those that I assume are usually on the same side of political debates as myself.

The throngs of bikers that will be armed in the area to protect those that are “executing their rights to free speech,” kinda makes it look even more lame to me. I mean, sure you will probably need them since it is a stick in the eye of radical Islamists who solve all their problems with weapons, but having absolutely no compassion for those that just find it all insulting and want to live THEIR lives in peace, cannot be ignored either. I have no dog in the fight actually aside from speaking out for human decency. Arizona is about as far away from where I am as anywhere in the United States, I never served to defend our flag, and I probably have too many Muslim friends that would never think of carrying a gun to defend their religion. I also speak out about teachings in Islam that are probably criminal, and this is no way to show them.

Think about all the people in Garland Texas who had to be in fear of the reprisal from the last stunt like this. Just because you think you are taking it to the place where the shooters might have worshiped, doesn't mean that the people in that Mosque tonight deserve this. Even if the place is radicalized, an act like this could serve to radicalize them even more, and then you just allow that to seep out into the streets where I assume there are a lot of people who are going to know what the people in Garland had to deal with. Oh did I mention that you are still being outwardly insulting for the sake of making a point?

The drum has been beaten, and I feel like I have said my peace. I will be fast asleep about 3000 miles away from Arizona tonight while this is going on. I will sleep well actually because I don’t think I have the right to be incendiary, despite the fact that some would say I am and often. I don’t specifically go after a religious group because I don’t like the way they worship (and yes that is what you are doing) and I definitely don’t drape myself in the flag, and surround myself by armed people to do it. To be honest with you it sounds a lot like the people you think you are making a statement against if you ask me.
Posted by Jeremy Crow at 03:41 No comments:

Shoot Out at the Not So OK Coral 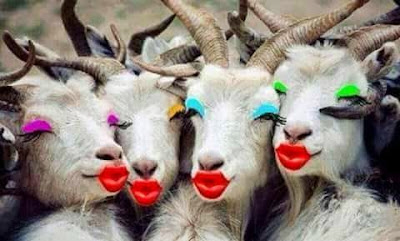 Remember the show “Undercover Boss?” I don’t actually know if this show is still on the air or not, but I do remember that I loved the show when it came out, thought it was ok the second season, tolerated it for the third, and then I remember the exact moment I stopped watching it. It was the “Twin Peaks” episode, where about 15 minutes into the episode I just said to myself, “Self? I have had enough of this show, and I really hate the owner of Twin Peaks.”

Seriously there had been plenty of owners as the show wound itself out for me that I couldn't stand, but the owner of Twin Peaks was the one that finally did it. He was a jerk, a misogynist (and I don’t say that lightly, you can run a place that exploits women, but this guy was over the top) and I just hoped that nothing good would happen for this guy. I definitely didn't want to stick around for the end of a show I was slowly growing to hate, to see him be the benevolent dictator, like that show always seems to end. I really looked at this place as somewhere I would never want to go, where bad things were bound to happen.

Well apparently yesterday bad things happened at a “Twin Peaks” and although I am not leaving the perpetrators out of the equation I am not going to let a place run like a wild west whore house off the hook for in the end having a wild west whorehouse atmosphere. Two rival biker gangs managed to have a good old fashioned “shoot out” and 9 people ended up dead. I mean I am not for censoring things, I definitely don’t want to come off as a moral crusader, and I am perfectly fine with people spending their time how they want, but the “Twin Peaks” culture from the owner on down SHOULD be discussed in this whole ordeal in Waco Texas. Sue me!

I can’t get that television show with that smarmy little worm smugly explaining his business model, and the bad taste it left in my mouth. Yeah I realize that it is a very bad reason to write something, but I at the very least hope that someone throws a microphone in front of the benevolent dictator of Twin Peaks and asks him about it. Wriggly little worms deserve to squirm, and you can’t expect all press about your “ideals” to be good, especially when your ideals belong back in the mid nineteenth century. He obviously forgot an old saying in the life business which is a play on the restaurant business. You order shit, you eat shit.
Posted by Jeremy Crow at 01:33 1 comment:


The woman approaches the stage. Her cheeks are painted red and her eyes are glowing with something other-worldly. I hold my breath. I know this is going to hit me right in the gut. Give it to me, sister. I am ready.

She warms up to her subject. The re-telling of her life gets more and more sordid and convoluted. The dam breaks and the lights shatter. "I was the one who decided to get into that van with those men," she said. "No one forced me to do that. I was responsible for my rape that night."

Already I can feel myself collapsing inwardly. This I was not expecting. I was not ready. No one should have to be that brave. That strong. That needy.

I stare at the other members of the audience. I am the Other. Everyone else is nodding in approval. Some are clapping. I want to vomit. A guy passes me a piece of cake. Stuff the emotions downward. Something else to focus on. I lift up the sugary fakeness with a plastic fork. I don't enjoy the taste of it at all.

Nine more minutes. People are smiling. Laughing. How could they? Let them who have the ears hear. I groan inwardly. Ain't nuthin' going to fix this. I focus on my breathing. On the walk I took with my dog and her doggie friend today in the woods. A purple trillium was blooming and the mayapples were busting out all over.

Seven minutes. A friend leaves. He is wiser than I am. I stay to witness the debacle. Why do I do this to myself?

A woman walks over to me and gives me her phone number. I glance at the name on the paper. She seems to think that I ought to remember her. "I'm working now," she says. "Odd hours. Call me." I stuff the paper into the pocket of my hoodie. "Sure." I glance at the name she has written down. Sheila. At her face. Never seen this woman before in my life. I will have to ask someone later. I am face-blind. My prosopagnopia seems to bother others a lot more than it bothers me. I've gotten used to it. It hasn't gotten any better but it hasn't gotten any worse either.

Three more minutes left in the performance. I know full well that there are people who are capable of manufacturing rape incidents out of their imaginations for their own twisted satisfaction or monetary gain. I have seen the results of such machinations up close. I despise people who manufacture their own victim-hoods. They are scum. They make a mockery of the human beings who are  real victims. The woman up on the stage is not making it up. What kind of society allows victims to claim responsibility for the actions of their predators?

She spends her last minute talking about her triumphs. But it is too late. I am fried. Is that someone crying? I cannot tell in the profound darkness. The woman exits the stage. The applause is thunderous. I cannot join in. Broken, I sing my way home.
Posted by sapphoq at 12:59 No comments: