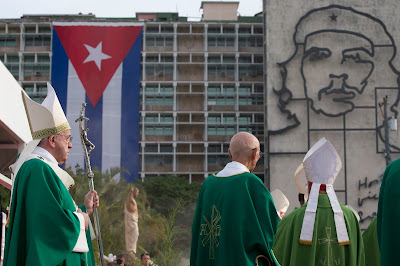 It appears that religion has become a very important part of society again, now that the far left has found an ally in the Pope of all people. The far right who has been in the trenches fighting the good fight on abortion, hand in hand (my ass) with the Catholic church have finally been cast aside for more pressing issues like amnesty for illegal aliens, global climate whatever they call it this week, seems warm but who knows, and of course a favorite topic of the left, eating the rich. Yes now that the Pope is the little darling of the far left we can assume that the overwhelming majority of Catholics that vote for far left nutjobs anyway can finally just come out of the closet once and for all.

The only real view I have ever shared with Catholics is the pro life one. The atheist that owns this blog happens to be pro-life (and if it is at all possible probably more pro life than me) so it doesn’t always have to be a religious issue, but it always gets dismissed as one. I of course have always been of the belief that there is a certain moral obligation that anyone should have with abortion, from the roots of Planned Parenthood (Margaret Sanger truly believed that Planned Parenthood would help black Americans to self exterminate) to the fact that most people wouldn’t treat a household pet as carelessly as they do a fetus. Now of course we have the entire disingenuous way they are selling fetal tissues and preserving fetus “lives” until they can be harvested. It’s pretty sick really.

In turn regardless of how you feel about the abortion issue, the issue has ramped up to the danger phase. I have always been angry with the left as they say a fetus is nothing but worthless tissue, but then hide every aspect of what they do with it. The act like they are actually ashamed, or know others would be scornful if they really saw what was going on. Worthless tissue like a mole or a cancerous growth doesn’t get any debate or secrecy when it is being dealt with; it is just dealt with, because IT IS actually worthless tissue. You don’t harvest it and if this trend continues you could actually see farms of destitute women breeding for fetal tissue. Oh that would never happen right? Well it is about what a woman can and cannot do with their bodies anyway so why not?

This is what separated me from the Pope once and for all. I realize that the Catholic church is a dying creed, and they need to bring more people into the religion and especially those that are already inclined to be subservient to a master, but to hug and kiss a brutal dictator like Castro, and then come here? To not bring up the one and only thing that the bulk of America has had in common with the Catholics and simply so not to offend their New Leftist friends, during a time when the Pope had the stage? No thank you, I’m perfectly fine with myself and happy to be without them.
Posted by Jeremy Crow at 22:17